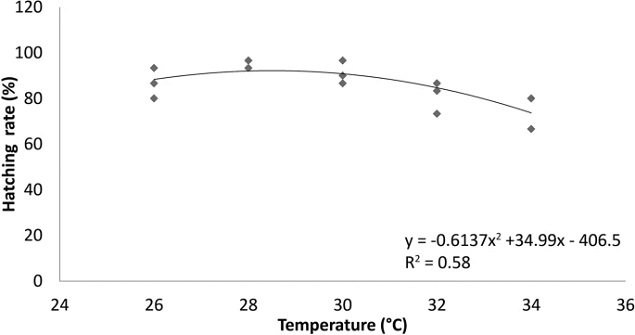 The early life history of a fish species is regulated by temperature, the most critical environmental cue. Thus, identifying the gradient of temperature that optimises the early development of a species is a prerequisite for standardising hatchery technology. Silver moony, Monodactylus argenteus is a tropical brackishwater ornamental fish that holds scope for the Indian and Global ornamental fish industry. This study unravels the effect of water temperature increments (26, 28, 30, 32, and 34 °C) on embryonic development, hatching, and survival rate, as well as the growth profile and survival rate of larvae at 5 days post-hatch (5 dph). Experiments were conducted to find out the optimal temperature gradient for egg incubation and early larval rearing. The experiment results revealed that the embryogenesis was accelerated at increasing temperatures, especially after the gastrula stage, and apparent differences were evident in each stage. However, the morphological development profile at each embryonic stage was similar throughout the temperature range. The incubation period differed significantly (P < 0.05) between the temperature gradients. The highest rates of hatching (90–100%) and survival after 12 hph were observed at 28 ºC and 30 ºC. Hatched-out larvae demonstrated the highest total length (1.92 ± 0.02 µm) at 34 °C, and the total length decreased at lower temperature levels. The yolk sac volume of larvae was shrunken with an increase in temperature, and a significant difference was observed between the studied temperatures. However, the oil globule diameter did not differ between the different temperatures. The total length and growth rate of 5 dph larvae were significantly different among the temperature treatments and increased with increasing temperature. In contrast, the survival rate of 5 dph larvae was highest at the range of 26 ºC and 30 ºC. The results indicated that the change in temperature from the spawning temperature (29 ± 1 °C) negatively influenced embryogenesis and the early development of M. argenteus. Based on the experimental results, the growth and survival of embryo and larvae were found to be optimum at 28 to 30 ºC. This prediction is of great importance for the effective management in the hatchery production phase, and especially the temperature could be considered the critical environmental cue.